A lot has been going on, on the dev-side, and in my personal life. I’ve had a bit of a holiday, I’ve been to the UK and back, and I’m at the start of trying to move away from Helsinki, and back to Tampere. My plans of a heads down summer of work didn’t really happen. Oh well :D

Due to the travel, hanging about in airports and nights in hotels, Neutrino has had a fair bit of attention. Effectively the engine side of it is complete.

Box2D has been integrated. I’m not a massive fan of Box2D, but it’s simple enough to use and reasonably fast for a small number of objects. I’ve gone the whole hog this time and written the debug renderer for the physics world! Seeing what’s happening under the hood really does make a difference.

Neutrino is still single threaded, and still, effectively, vsync locked. I’m going to do a bit of work at some point to move Box2D over to another thread and fix the fucking timestep, at which point it’d be interesting to see it run on a GSync screen. But anyway… 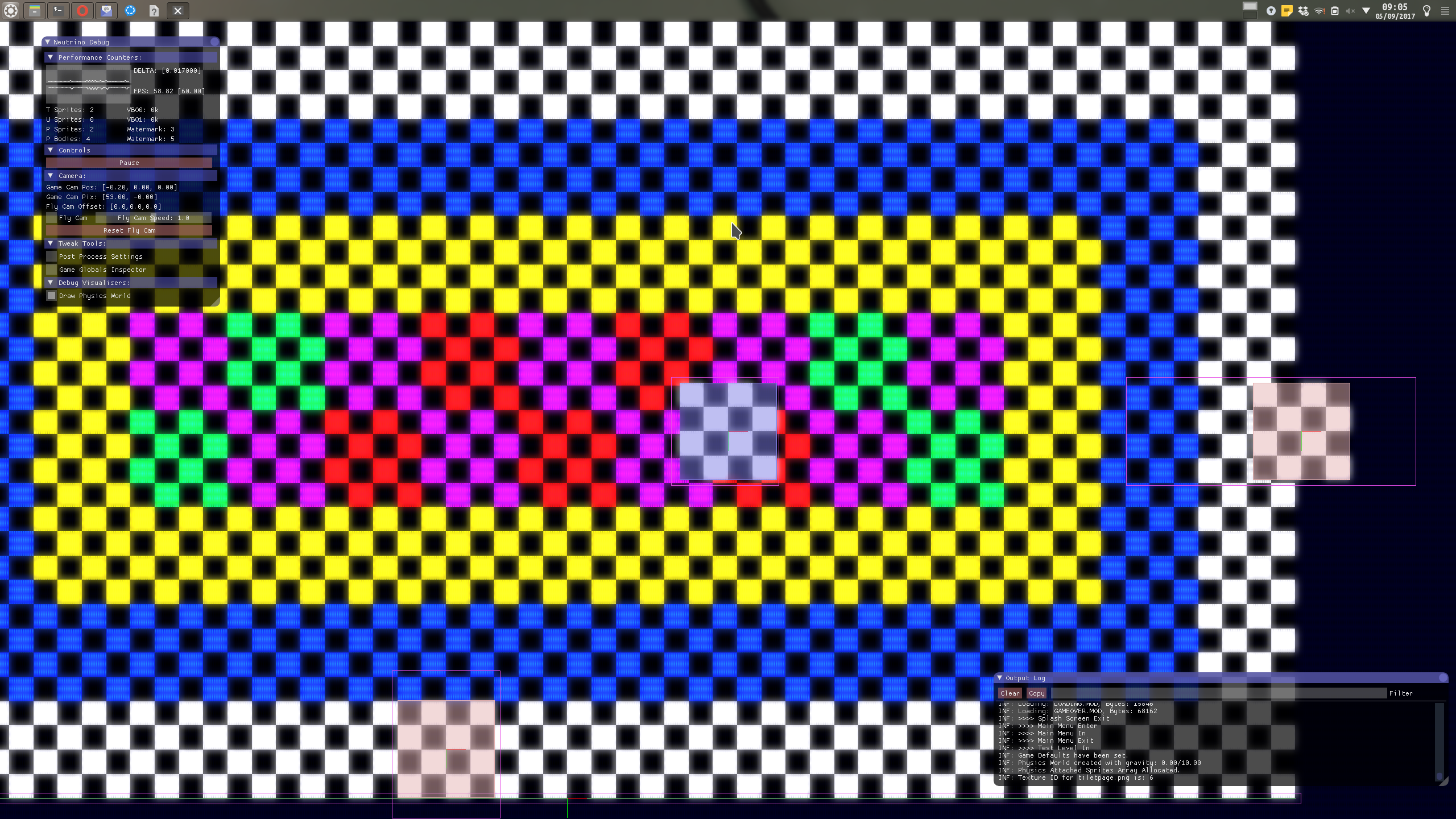 Still not much to look at, but it’s getting there. Next step is to make a particle emitter editor, bullet trajectory “pattern” editor and a spline editor for the attack waves. Then I think I can make some levels…

A month or so ago I decided that I had a lot of bits, but I didn’t have a game. I really should start putting this all together.

Steam’s a good forcing function for this: If I’m going to make an online game then I really need to have it running through Steam and then get some other people to play it! To do that, I’ll need working UI and a proper flow in-and-out of the various game modes.

UI in UE4 is pretty lovely. UMG has its quirks, but it works, looks good, and compared to the complete abomination in Unity, is a joy to put together. And — shock — I really like Blueprints for chaining UI together. Delay node ftw!

That being said, there’s still a lot of UI screens to put together — once you throw in game-modes, with options, lobby screens, error handling etc. — but I have a working screen for each part of this (with no real thought applied to the styling atm) and I’m able to enter and exit a game.

Online Session handling (like pretty much everything else in UE4) is piss poorly documented. There’s a video showing you how to do it in Blueprints, and a working example in Shooter Game that does it in C++. Because it’s so intrinsically tied to the UI, for the first pass I opted to start a simple blueprint session and see if I can connect to it via Steam. This took the better part of a day, but it does actually work; I can see hosted games over Steam, pull up some small bits of information about them, and I can join and leave a session. Wow!

The problem is, the blueprint stuff doesn’t really have any idea about any of the custom parameters that define a hosted session, so I’m going to have to go back under the hood and do this properly in C++. Then I can filter against game mode, see the name of the server, handle friend invites and the like. But for now, just for the purposes of development, I have a “game” that I can upload to Steam, send to friends, and we can run about and shoot each.

Time to grey box some levels to run around in.