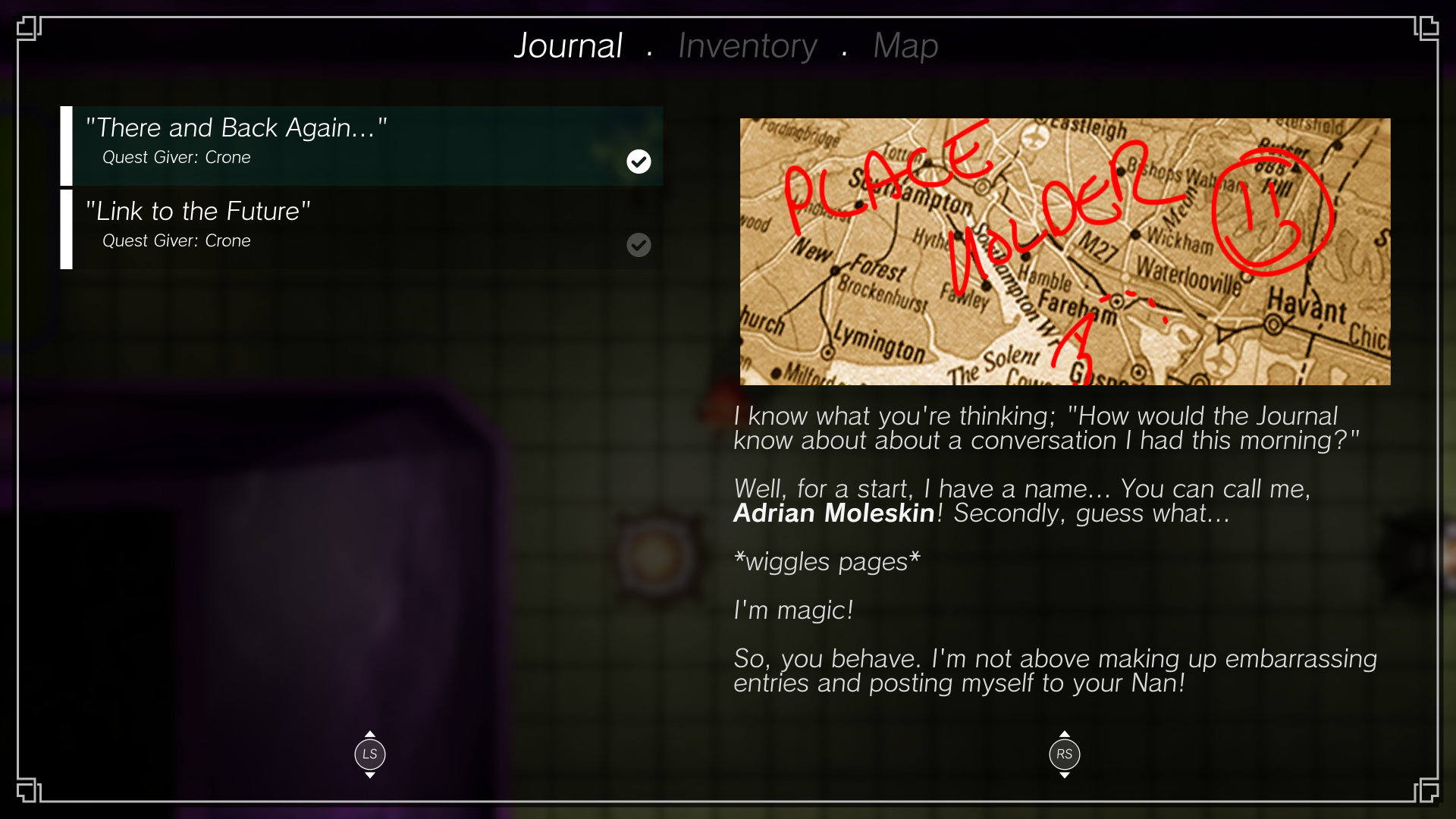 Contract work. Spent the day updating an iOS game I wrote for someone, last year.

Got deep into the Quest UI. Added a toast pop-up, for when you get notified of, or complete, a quest, and started on the main Journal UI screen.

The Journal UI has two scroll areas, the one on the left lists all the quests that you're currently aware of, and the area on the right shows description text. I've got the list on the left working, kinda, but not the descriptive area.

I wrote some descriptive text for the current quests and promptly decided it was way too dry, so re-wrote it all in the first-person, as if the Journal were a diary and the player was the one taking notes. This gives me more scope for the odd bad pun (and sarcasm), but it's not going to fly. I'm one of those people that doesn't like putting words into a player's mouth (or fingers). There's no point in this game where I'm going to mention the in-game character's name, gender, or have them talk. All that stuff will be left for you, the actual player, to fill-in.

I know there are two camps on this. I'm in my tent with the zip pulled up. LA LA LA etc.

So, obviously, the journal must be magic, and have a personality of its own... I've done a quick first draft along those lines and, yeah. That'll work.

I wonder if I should give the journal a name. Adrian Moleskin?

Did the last bits and pieces for the Journal UI. Quest descriptions are included, and there can optionally be an image to go with each quest. Ideally these will be a little tongue-in-cheek. Worst case, they're just bits of the map.

Created a set of skin tones, going from white to black, with slightly different sub-surface profiles. I'm not sure that the profiles are making much of a difference, but the skin tones look ok. I'll maybe tweak them when I see them in more lighting setups. For now, they're as close as I could get to the reference: https://www.deviantart.com/puppsicle/art/Skin-Tone-Cubes-Free-to-Use-842445436

Updated Blender, and created a generic male rig as a base for NPCs. I should have done this in the first place, but I got all excited about Auto Rig Pro...

Added in all the base classes and BP for Fisherman's Friend, another of the NPCs in Henge End. He can be in multiple places depending on the timeline, so a little more complicated than standard, but it's all a well-worn path at this point. I did, however, get to the end of my patience with debugging the TimeLine, so the bulk of the day was spent in the Secret Squirrel Dev Menu, adding a scrolling list of quests so that I can change them dynamically. I also added in a few buttons to jump to known "good" timeline locations, like after the intro, or after the player has the sword and journal.

The best bit about this work is that I can see exactly what they are at any given point in the UI. Should have done this two weeks ago, but anyway...

Earlier in the week I was alerted to another race condition in Cecconoid (well, Eugatron), so I patched that, made new builds for Itch and Steam, and pushed them up. It's really interesting watching the Itch.io stats since the Bundle For Racial Justice and Equality, as Cecconoid gets downloaded about 30-40 times a day now. One day I'll sell that many copies of something :D

Added in another NPC and created the timeline events for them. Still placeholder mesh and materials, but enough to get to the next bit of the timeline. Aim is to get the whole on-boarding experienced sketched out by the end of next week. Then I can go back and fill in the details as the mood takes me.

Since I've starting making more shipping builds, I decided to go through and add #if !UE_BUILD_SHIPPING around out a lot of the dev helpers/debug stuff that I've written. Most visible aspects of this are the missing Dev Notes and Secret Squirrel Dev Menu. Better to do it now and get in the habit.

The rest of the day was spent tracking down a tiny glitch as the camera swapped from following two actors, to reverting back to following just the player. Either I've changed something I've forgotten about or this glitch has been in the build forever and I've not noticed it, but I've fixed it by immediately popping out of the reset mode, back to the follow mode.

I've spent ages polishing the camera for this game, would very much like for no one to ever notice it.

Previous Post: "When the only tool you have is a hammer..."