Added audio and VFX to the spider attacks I built last week. Feels quite good now, but I still need to make a few tweaks to how aggressive they are, and how far they can flob. Atm they can spit for miles!

New audio meant I had to adjust the low-pass filter in the foggy areas because it was filtered out the spider’s movement SFX. The new values are much more subtle, but the eagle-eared amoung you will still pick-up on what on I’m doing.

Fixed a tiny bug in Steve Streeting’s UE4 Package script, then made a new build and played the game for the first time in weeks! 😊

Changing tack. If I want to finish off the spider gameplay in Ytene I need to be able to shoot vine-sacks from a distance. That means I need the bow and arrow, so today I started on the player's movement animations.

Umm’d and ahh’d about how to do this, and decided to do specific animations for movement (relaxed and aiming) and an upper body blend for the reload animation.

Today I got the strafe, idles and backward/forward walks done in Blender. Tomorrow I’ll try and setup the animation blueprint… 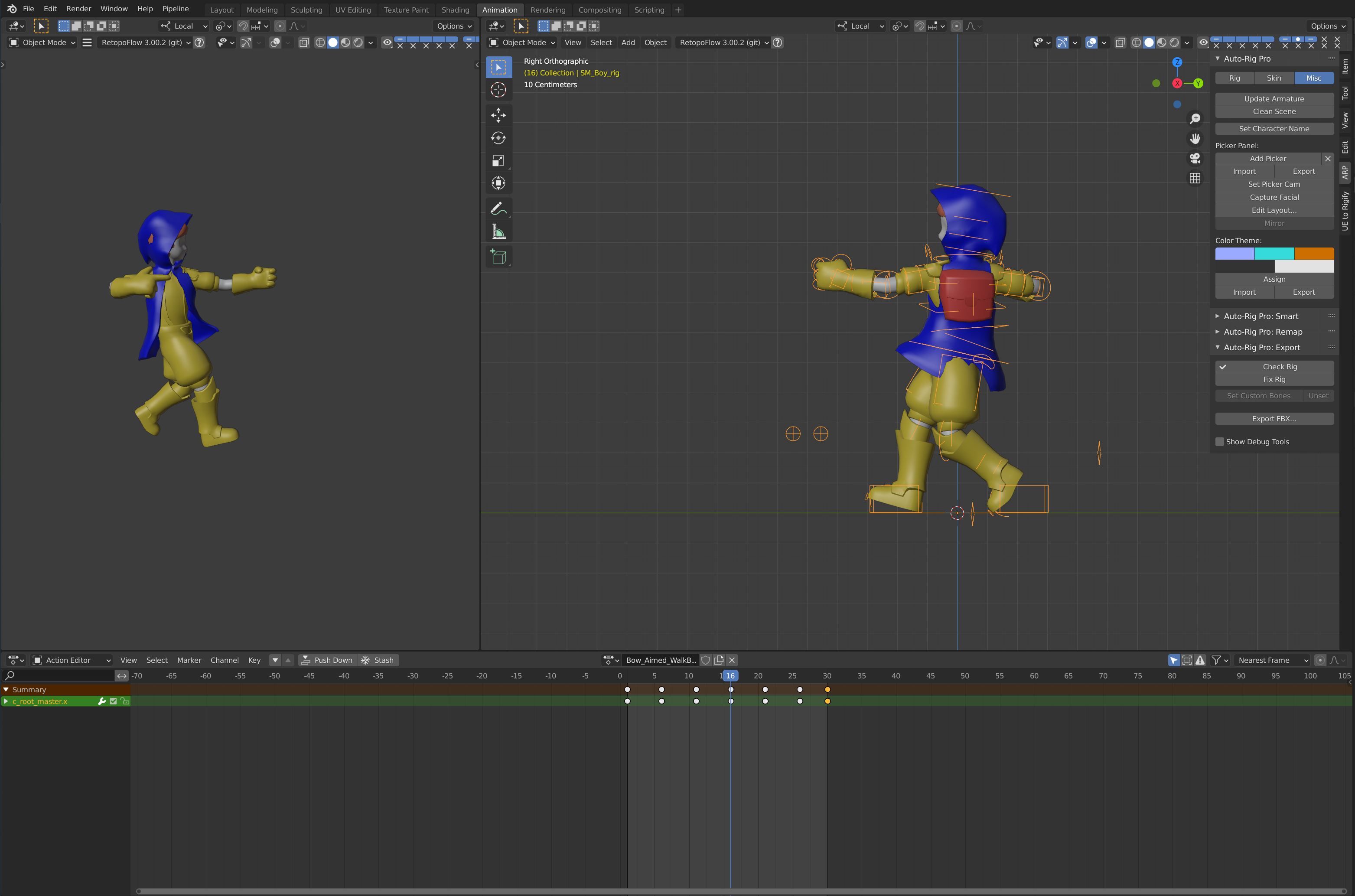 Did a cracking animation for firing arrows, this morning, and then somehow lost the blend file when I inadvertently pressed the power button on my computer (don't ask).

Wasn’t a complete disaster, I’d exported the FBX, but it’s not going to be easy to make any tweaks to it…

Speaking of animations I can’t tweak, the original walk and run animations were done in Modo and re-targeted to the new Blender rig. I want to use these when holding the bow, but as I don't have them in Blender… Anyway, it turns out there are additive bone layers in UE, and holy-shit if that doesn’t just work out of the box! I can add keyed, rotational offsets to bones in a separate animation track, from within the editor… Absolute life saver! Annnnd now I have a new hammer, everything looks like a nail.

Setup the animation blueprint, 2D movement stuff, and montages for relaxed and aimed movement with the bow, and added in all the code and state tracking to actually fire an arrow and block mashing. Even smoothed out the camera movement…

Snatched victory from the jaws of defeat… just.

All about the bow, today. Modelled, textured and animated one, added it to the player and gave it a custom animation blueprint. It’s got states for reload, pulled idle, relaxed idle, and I can play montages on it… 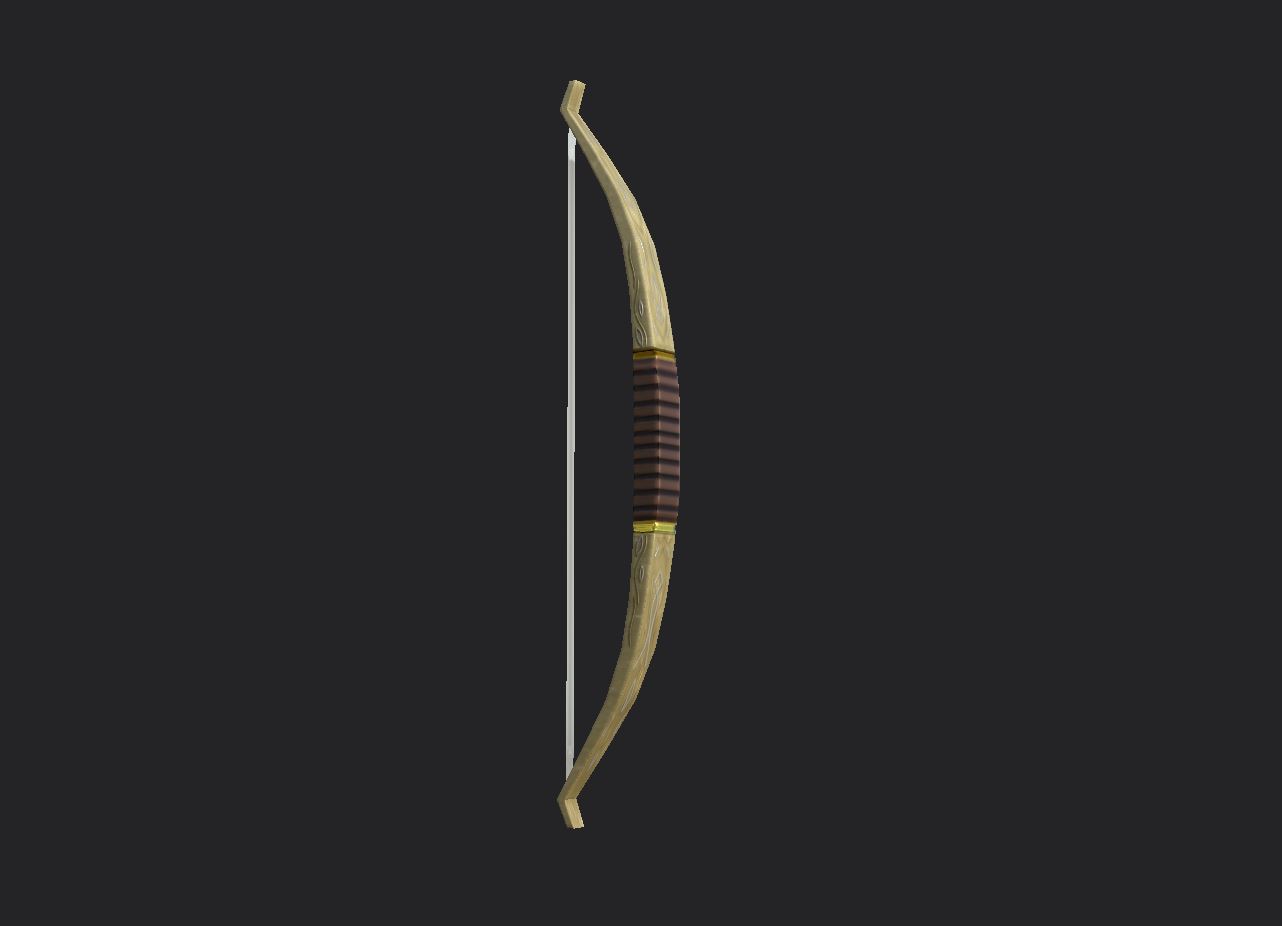 The player character carries / hides it through the inventory UI, and the player controller registers the A button, so it can be fired through relaxed or z-targeted states.

I think it’s basically good to go. Except it doesn’t fire any arrows yet…

Modelled and textured an arrow and got it firing! Which was the easy bit…

Most of the day was taken-up putting the arrow into the player’s hands during reload, hiding it just before the bow is drawn, and then spawning in another, attached to the correct place on the bow, while the player’s Z-Targeted.

When fire’s pressed, the spawned “fake” arrow’s destroyed, and a projectile’s spawned in front of the player. Looks great in-game, but it’s a lot of smoke and mirrors…

And I just want to re-iterate how cool it is to drop an additive layer on an animated bone (my new toy): I noticed that my player’s not perfectly lined up with other actors when Z-Targeting. Rather than bounce back to Blender, modify, and re-export everything, I could sit in-editor, slightly rotate the pelvis, and hit apply. It’s. Just. So. Easy.